I sincerely hope that international arbitration will avail before Europe is convulsed in the greatest war of any time. All, I am sure, will regret the critical position existing at the present time, and pray that a disastrous war may be averted. But should the worst happen after everything has been done that honour will permit, Australians will stand beside our own to help and defend her to our last man and our last shilling.
— Andrew Fisher 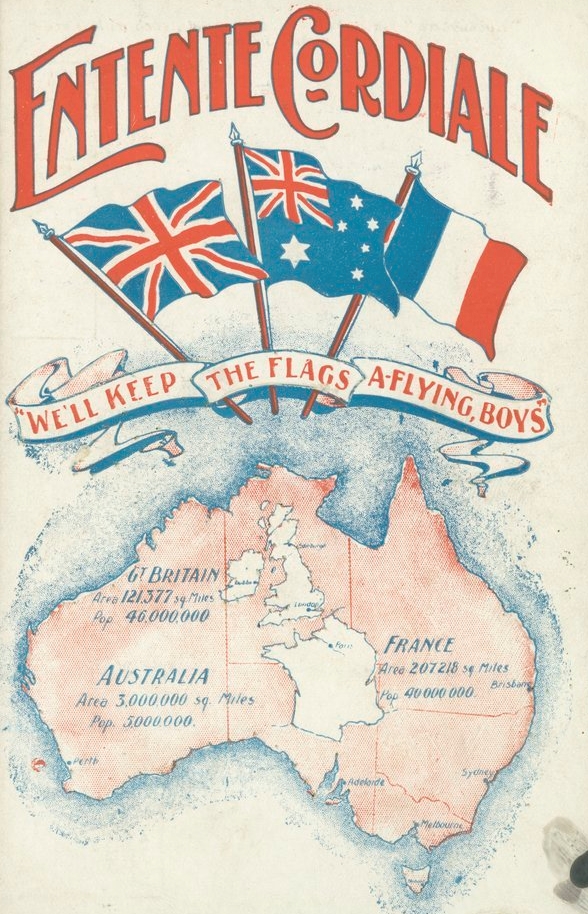 My culture, my story is the theme for this year’s festival. Running from 14 April to 29 April 2018, it is a celebration of Aboriginal, European and natural heritage in and around Canberra — Australia’s nation’s capital. Read here if you would like to attend one of the many festival events or to find out more about the festival. 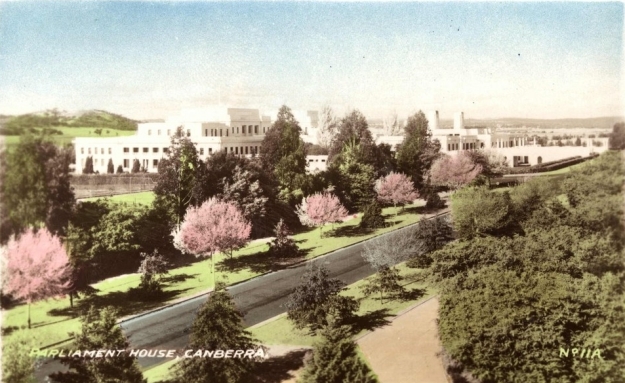 The months and days are the travellers of eternity. The years that come and go are also voyagers.
— Matsuo Basho

My mind is on the First World War this month. Anzac Day, will be commemorated this month. On this day (25 April) Australians and New Zealanders remember those who have served and died in war. It marks the anniversary of the first major military action fought by Australian and New Zealand forces during the First World War. This was the landing on Gallipoli, which happened 103 years ago, in April 1915.

Postcard celebrating the end of World War I, 1919

The past is prophetic in that it asserts loudly that wars are poor chisels for carving out peaceful tomorrows. One day we must come to see that peace is not merely a distant goal that we seek, but a means by which we arrive at that goal. We must pursue peaceful ends through peaceful means. How much longer must we play at deadly war games before we heed the plaintive pleas of the unnumbered dead and maimed of past wars?
— Martin Luther King Jr. 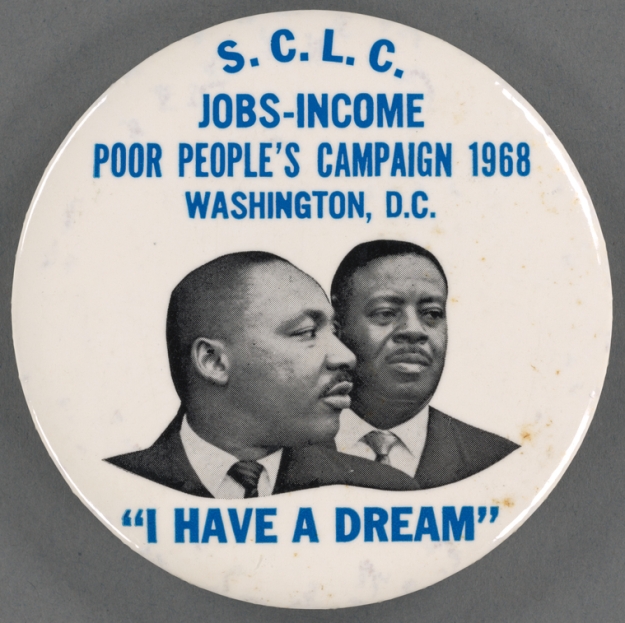 Bad Girls : A History of Rebels and Renegades by Caitlin Davies
Miss Muriel Matters : The fearless suffragist who fought for equality by Robert Wainwright

I am afflicted with the power of thought, which is a heavy curse. The less a person thinks and inquires regarding the why and the wherefore and the justice of things, when dragging along through life, the happier it is for him, and doubly, trebly so, for her
— Miles Franklin

The deepest definition of youth is life as yet untouched by tragedy.
— Alfred North Whitehead

Women ought to have representatives, instead of being arbitrarily governed without any direct share allowed them in the deliberations of government.
— Mary Wollstonecraft

Those who expect moments of change to be comfortable and free of conflict have not learned their history.
— Joan Wallach Scott

I am seeking to rescue the poor stockinger, the Luddite cropper, the “obsolete” hand-loom weaver, the “utopian” artisan, and even the deluded follower of Joanna Southcott, from the enormous condescension of posterity. Their crafts and traditions may have been dying. Their hostility to the new industrialism may have been backward-looking. Their communitarian ideals may have been fantasies. Their insurrectionary conspiracies may have been foolhardy. But they lived through these times of acute social disturbance, and we did not. Their aspirations were valid in terms of their own experience; and if they were casualties of history, they remain, condemned in their own lives, as casualties. ― E.P. Thompson

Here are the answers to 10 Questions About Women’s History:.

For future reference you can find answers here as well.

Easy or difficult? Any surprises?

Bible study group at a Melbourne Church of England, about 1915 to 1918

Centenary of the Representation of the People Act

This year is a special year in Women’s history. The 6 February 2018 was the centenary of the Representation of the People Act, the change in the law that gave some women in the United Kingdom (UK) the right to vote for the first time.

The Representation of the People Act gave the vote to women over 30 who owned property or were graduates voting in a university constituency. It also gave the vote to more men — their voting age was lowered to 21 and the property qualification was abolished. Women would get the same voting rights as men, ten years later in 1928 with the passage of the The Equal Franchise Act.

British women’s right to vote came after a bitter struggle between activists and authorities. The suffragette movement ran a radical and militant campaign that included property damage, hunger striking and the death of Emily Davison at the 1913 Epsom Derby. Authorities responded with surveillance, imprisonment and force-feeding. The film Suffragette is worth watching if you want to start understanding the suffragette cause.

If  you are interested in finding out more here are some resources:

Women’s history at the National Library of Australia

In 1902 Australia became the first country in the world to give most women the right to vote and the right to stand for election to a national parliament. Indigenous women and men would not be provided with national voting rights until 1962.

Having secured the right to vote in Australia for most women, Australian female activists used their success to support women in the UK and the United States to get the right to vote. If you want to know more about this a really interesting essay to read is Birth of a Nation? by Clare Wright.

Bessie Rischbieth was one of these women. In London, in 1913, during the height of the suffragette movement, she found their cause deeply inspiring. This would drive her own campaigns for women’s rights in Australia. Bessie also built up a large collection of suffragette items that were bequeathed to the National Library of Australia (NLA). Deeds Not Words is an NLA exhibition based on Bessie’s collection. It opened on the 6 February and ends on the 19 August 2018. I am really looking forward to seeing this.

Muriel Matters was an Australian woman who joined the suffragette cause in a big way. Her commitment included in 1908 chaining herself to an iron grille in the ladies’ gallery of the House of Commons, which resulted in a month’s imprisonment in Holloway Prison; and in 1909 flying over London in an airship inscribed ‘Votes for Women’ and scattering handbills over the city.

Here are some resources about Muriel Matters if you want to know more:

If you are interested in the suffragette movement I hope this information helps you do some further exploring. I think there are some really fascinating stories to discover here. 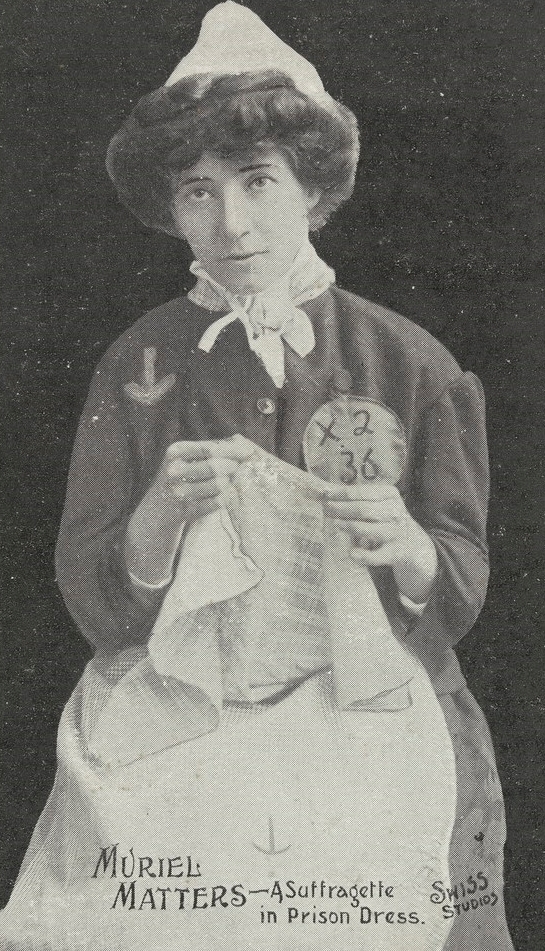 I am afflicted with the power of thought, which is a heavy curse. The less a person thinks and inquires regarding the why and the wherefore and the justice of things, when dragging along through life, the happier it is for him, and doubly, trebly so, for her.
— Miles Franklin